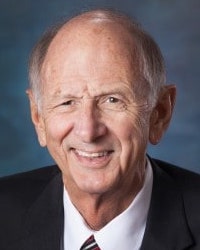 Tom D. Jester, Jr. joined the law firm of Minor & Knight, now Minor & Jester, P.C., in 1967 and practiced here until his passing. He had decades of experience in all areas of civil law, but was especially knowledgeable on the subjects of real estate law, business law, and civil litigation. Tom was highly involved in the Denton, Texas community and had an extensive history of service to the community, both personally and professionally.

Tom obtained his law degree from Southern Methodist University, and was licensed to practice law in the State of Texas since 1967.

He also obtained a Bachelor of Science in Business Administration from the University of Arkansas. During school, he spent his summers rough-necking in the oil fields in New Mexico.

Tom had a strong history of service to the Denton, Texas community and leadership in his profession. Tom served as Mayor of the City of Denton from 1975-1976 and as a Denton City Council Member from 1972-1976. Over the years, he continued to serve Denton in a number of leadership roles. Tom was a former Director of the Denton Chamber of Commerce and of the Denton Country Club. He was also a former Chairman of the Drive for the American Cancer Society.

In his profession, Tom also repeatedly taken on leadership roles. He was President of the Denton County Bar Association and was a Fellow of the Texas Bar Foundation. He served also as a City of Denton Municipal Judge and a Corporation Judge.

Outside of his law practice, Tom was also a respected business man in the Denton community. Prior to graduating law school, Tom worked for Ford Motor Company in the Dallas District Sales Office. He served on the Board of Directors of a title company and served as Chairman of the Board of Jester Adoption Services, Inc. In addition, Tom was a developer, owner and operator of apartment complexes, office and commercial buildings as well as rental residential homes.

Contact Us
Practice Areas
Client Reviews
★★★★★
Handled my very complicated divorce with consistent precision and care. My case was able to be closed with mediation, which I wasn't expecting. This was accomplished by Mr. Henry's masterful planning and understanding of the law. I highly recommend his services. Justin
★★★★★
Mr. Henry and staff are professional, courteous, respectful and extremely knowledgeable. Our calls and questions are answered promptly. I highly recommend Mr. Henry for your legal needs! Mari
★★★★★
I had just turned 62 and found myself unemployed for the first time in my life. After several months of job search, I was getting worried. I had several thousand in savings and did not want to lose it so I signed up and started receiving my Social Security payment. Thomas
View More
Submit a Law Firm Client Review