Practicing Law in Denton for Over 50 Years Contact Us NowFor a Consultation
Home
Attorney Profiles
Fred H. Minor (In Memoriam) 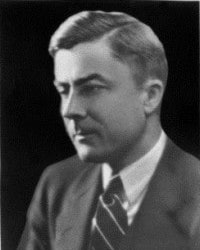 Fred attended the country schools of Denton County, Lewisville grade and high schools, North State Normal College (now the University of North Texas), where he earned a teacher’s certificate, and the University of Texas law school. Before studying law he taught elementary school for four years. At Texas, where he earned the LL.B. In 1916, he graduated first in his class and won the much-coveted “Cyc” award, an encyclopedia of law given to the senior with the highest scholastic average.

From 1917 until his death, Mr. Minor practiced law in Denton. In 1926 he was elected to the Texas legislature, where he remained until 1933. During his second term the illness of W.S. Barron allowed Mr. Minor to act as Speaker of the House, a position to which he was elected in 1931. Mr. Minor served on the Denton City Council for eight years and the Denton Board of Education for sixteen years. He was chairman of the city council for one term and president of the school board for twelve years. He was a Mason, a Knight of Pythias, a Kiwanis, a member of the Denton Chamber of Commerce (of which he served as term as president), and a member of the First Christian Church of Denton. In recognition of his contributions he was awarded the Otis Fowler Award, the highest honor given by the Denton chamber, and was named distinguished alumnus by the University of North Texas.

Contact Us
Practice Areas
Client Reviews
★★★★★
Handled my very complicated divorce with consistent precision and care. My case was able to be closed with mediation, which I wasn't expecting. This was accomplished by Mr. Henry's masterful planning and understanding of the law. I highly recommend his services. Justin
★★★★★
Mr. Henry and staff are professional, courteous, respectful and extremely knowledgeable. Our calls and questions are answered promptly. I highly recommend Mr. Henry for your legal needs! Mari
★★★★★
I had just turned 62 and found myself unemployed for the first time in my life. After several months of job search, I was getting worried. I had several thousand in savings and did not want to lose it so I signed up and started receiving my Social Security payment. Thomas
View More
Submit a Law Firm Client Review